Henri Matisse: A Celebration of French Poets and Poetry

Matisse produced his greatest series of etchings in 1930, consisting of twenty-nine drypoints for Poésies with prose by Stéphane Mallarmé (1842-1898), the French symbolist poet.  Mallarmé inspired several revolutionary artistic schools in the early 20th century, including Cubism, Futurism, Dadaism, and Surrealism.  The etchings for Poésies came about as a proposal from Albert Skira after Matisse had returned to France from an extended stay in Tahiti.  Many of the images show the artist's recollections of the South Pacific.

Matisse was pleased with the etchings for Poesies de Stéphane Mallarmé, calling it one of his happiest and most beautiful series of prints that he had ever seen.  With his habit of modest, matter-of-fact understatement, he remarked:

“After concluding these illustrations for the poems of Mallarmé, I would like simply to state that this is the work I have done after having read Mallarmé with pleasure.”

The etchings were published in 1932, fifteen years prior to Matisse’s large series of 127 lithographs for Florilège des Amours de Ronsard, published by Skira in 1948.  This later project resulted at a time of great difficulty for Matisse when he was recovering from a cancer-related surgery and was no longer able to work long hours in front of an easel painting.

“Matisse’s readings of Ronsard were channeled into imaginative conceptions and creative responses to Ronsard’s poems about women and love . . .  they are to be gazed at, admired, desired, and consumed.”

The subjects of Pierre de Ronsard’s poems lend themselves gracefully to Matisse’s strong imagery and themes that include portraits, the female figure, exotic tropical plants, flowers and fruits.  Matisse made his own selection of poems by Ronsard, creating a magnificent tribute to one of the greatest literary figures of the French Renaissance period.  Matisse also translated each poem from Old Renaissance French to contemporary French spoken today for the publication of his anthology of Ronsard's love poems.

“The Ronsard is magnificent in scale with sheets as big as a tabloid.  The drawings are wonderfully free in style, some extending almost the full height of the page or boldly spread across the sheet without regard for margins.”

In making the two sets of prints, Matisse used the method known as ‘drawing blind.’  The process involves a great deal of preparation and, if done properly, can render results showing remarkable fluency and spontaneity.  Matisse said that he employed this technique for several series of prints.  In his own words, he commented: “After hundreds of drawings and research studies in the definition of form, then after the image was deeply ingrained in my memory, I closed my eyes and began to draw.”

There are a total of 63 works consisting of 47 lithographs in sanguine and 16 etchings from the Albert Skira Estate, Genève.  All prints are framed with UV-3 plexi.

This collection originated from the Bibliothèque Rosabianca et Albert Skira, Genève (published by Albert Skira).  The set of Matisse’s Florilège des Amours de Ronsard lithographs are printed in sanguine and come from the personal collection of the publisher, with the signed and numbered Justification Page that states: "Cet ensemble a été publié et réservé exclusivement à l'éditeur Albert Skira". [This set was published and reserved exclusively for the publisher Albert Skira].

CMPE acquired the complete set from the estate of the publisher in 1999 and, at that time, the prints were still in a brown paper wrapper In-folio, never opened or exhibited since its printing in 1948.  There is also a set of etchings from Matisse’s 1930 edition of Poesies by the nineteenth century French poet Stéphane Mallarmé.

Four (4) include the sixty-three (63) works of art (etchings and lithographs), the original book cover and original slip case (to be exhibited together); three (3) crates include wall panels [five (5) introduction panels (silkscreen on painted wood) with text related to the artist, the 19th century poetry of Stéphane Mallarmé and the 15th century poetry of Pierre de Ronsard]; twenty-four (24) illustrated wall panels of preliminary sketches by Matisse showing the design of illustrations and book page layout and typography, as well as photographs of the artist drawing with a wax crayon in the preparation of the Florilège des Amours de Ronsard lithographs in the studio of the lithographer Mourlot.

Complete coordination of schedule arrangements at no added cost to the borrowing institution.  USArt is the designated carrier for this exhibition. 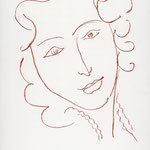 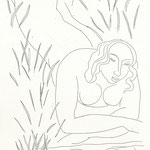 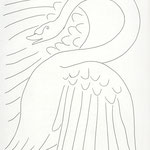 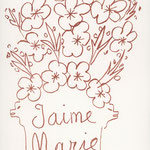 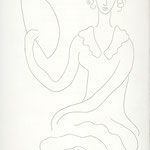 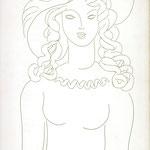 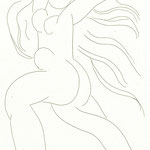 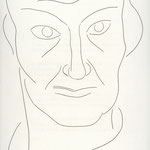 One thousand (1,000) printed brochures, published by Contemporary and Modern Print Exhibitions, with information on the prints in the exhibition Henri Matisse: A Celebration of French Poets & Poetry.

printed and mounted on tan beveled edge board, a total of sixty-three (63) plus two (2) labels for the book cover and slip case [to be exhibited in a secured vitrine].

with suggested essay material and “in-class” questions (can be used for docent training as well).  Copies available for educator distribution use.